More than 40% of Americans think companies and the U.S. government are equally responsible for taking positive steps to support Ukraine during its invasion by Russia, a new survey suggests.

And of the two-fifths of people who think corporations could be doing more to demonstrate support for Kyiv, 43% think their actions so far have come across as performative and inauthentic.

The data, released Wednesday, comes from a weighted survey of 1,000 people that was conducted in late April by Sparo, a Microsoft-partnered startup that helps companies solicit donations for causes when their customers buy goods or services.

Forty-three percent of respondents said responsibility for supporting Ukraine was shared equally between businesses and the Biden administration. Nearly 30% said it was mainly down to the government, while a negligible percentage said businesses were most responsible for a pro-Ukraine response. 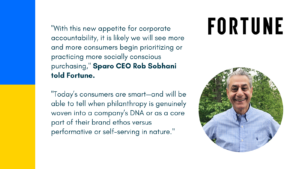